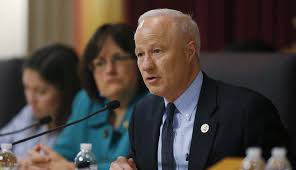 A proposed law with bipartisan support would dramatically weaken the ability of legislators to extricate the United States from perpetual armed conflict.

Introduced by Senators Bob Corker (R-TN) and Tim Kaine (D-VA) and known as the Corker-Kaine AUMF, the bill would authorize the president to wage ongoing wars against the Taliban, al-Qaeda, ISIS in Iraq and Syria, al-Qaeda in the Arabian Peninsula, al-Shabaab, al-Qaeda in Syria, the Haqqani Network, and al-Qaeda in the Islamic Mahgreb, in countries including Afghanistan, Iraq, Syria, Somalia, Yemen, and Libya.

The bill would require the president to notify Congress 48 hours after striking a new associated force or using military action in a new country. It would give Congress a 60-day window to block further military action against that group or in that country.

Senator Rand Paul (R-KY) concluded that Congress had “completely abdicated” its constitutional duty to review, debate, and authorize the use of military force. Bernie Sanders (I-VT) warned that the consequences of Congress neglecting its constitutional duty were “dire and horrific” for both America and the rest of the world. Chris Anders of the ACLU urged senators to make opposing the Corker-Kaine AUMF “a top priority.”

Senator Jeff Merkley (D-OR) believes the Corker-Kaine AUMF would flip “constitutional authority on its head by giving the President the power to start and expand wars while leaving Congress with the impossible task of overriding Presidential actions.”

Merkley has offered up an alternative, the Constitutional Consideration for Use of Force Act, which includes provisions that ensure that “Congress must vote proactively before the President expands the war to new groups and territories and puts in additional checks and balances, including a 3-year sunset clause, limits on ground troops, and requiring adherence to international law.”

The Corker-Kaine measure does not include an expiration date, which was disappointing to some senators.