Military Blog
You are here: Home1 / Army Offering a Variety of Perks to Attract New Recruits 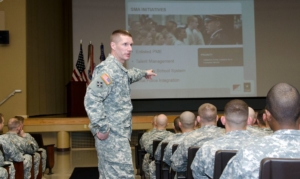 In order to meet the targeted active force end strength of 476,000 by October 1st, the U.S. Army is developing programs to attract new recruits. In addition to the active force increasing by 16,000, the Army National Guard will grow by 4,000 and the Army Reserve by 8,000.

The proposed benefits include bonuses and other monetary incentives as well as training that will into translate into future civilian employment credentials and college credits.

The Army’s Noncommissioned Officer Education System will also give soldiers an advantage that will directly transfer to universities the Army has partnered with to ensure courses transfer for college credit, according to Sgt. Major of the Army Daniel Dailey.

Coming into the job in January 2015 at age 42 — making him the youngest Sgt. Major in Army history — Dailey already had a long to-do list, focusing on professional military education, readiness, robust training, physical fitness, and helping soldiers transition smoothly into civilian life. The educational benefits the Army offers will be a key part of its effort to attract additional soldiers, Dailey said.

“The number one reason men and women join the military today is because of sacrifice and service, and the second one is because of our education benefits,” Daily said. He went on to say, “And we will fight to sustain those benefits. … We cannot erode benefits to our soldiers and their families or we will put the all-volunteer force at risk … we have to continue to invest in the soldier because that is an investment in the future.”

As soldiers advance through the ranks and attend the Advanced Leader Course and the Senior Leader Course, they will earn many of the requirements for an undergraduate degree, he said.

“That way, in the future, a senior noncommissioned officer should have an undergraduate degree before they go to the Sergeant Major Academy,” Dailey said.

“So I think that we have got tell America: One, we need your sons and daughters to continue to sacrifice and serve because it is the right thing to do for their nation, but two — when we send them home, they are going to be better than when we received them, and that’s our commitment to the American soldier.”