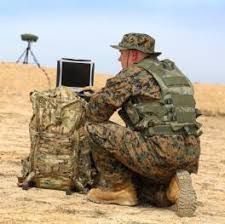 It takes a lot of power to keep a unit charged up. Before now, that amount of energy required generators which were substantial in size and weight. That all might change, however, thanks to two MIT graduates.

Veronika Stelmakh and Walker Chan are co-founders of a small portable generator – roughly the size of a soda can. The “soldier-borne generator for reduced battery load” would run on fuel, likely butane or propane, then convert that fuel into electricity using infrared radiation. While the device will use photovoltaic cells (cells that create an electric current when exposed to light), no sunlight will be necessary to power the device. The photovoltaic cells will be a byproduct of the infrared radiation.

Lightening the load has been a goal for the Army and Marine Corps. This small unit would essentially turn one soldier into a portable charging station for the rest of his or her unit. It will weigh about one pound and reduce battery load by up to 75%. Currently, soldiers carry 15-20 pounds of load for the batteries that power up their required devices. As their packs are often more than 100 pounds, shedding any of that weight would be helpful.

Stelmakh and Chan developed the device through MIT’s Institute for Soldier Nanotechnologies.