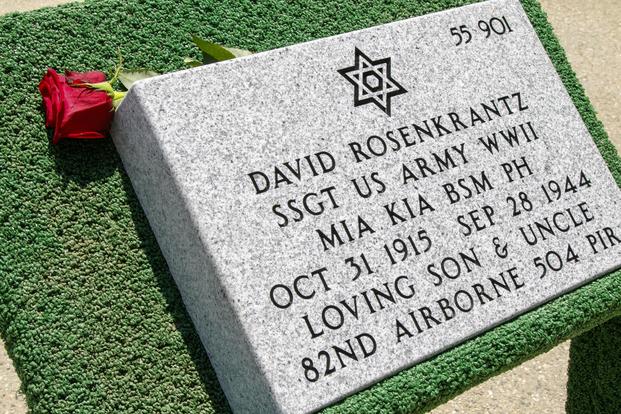 After 74 years, Staff Sgt.David “Sgt. Rosie” Rosenkrantz was finally laid to rest just outside of his hometown of Los Angeles.

The 28-year-old legend had been overseas for just three months when he and another paratrooper were mistakenly dropped into an Italian unit. The Italians, 200 of them, surrendered to Rosenkrantz and his fellow soldier.

But on Sept. 28, 1944, just a year after his victory over the Italians, Rosenkrantz was killed by German machine-gun fire during Operation Market Garden in the Netherlands, a fierce battle recounted in the 1977 film “A Bridge Too Far.”

American troops were unable to recover his body, and Sgt. Rosie was listed as missing for decades.

Canadian, Dutch and American Graves Registration teams had been active in the area when a Canadian team collected remains from the area around Groesbeek and buried them at the Canadian National Cemetery as “unknowns.”

Rosie’s remains were among them.

The Defense POW/MIA Accounting Agency (DPAA) disinterred the grave and working with mitochondrial DNA, confirmed the remains Rosie, the son of Russian- Jewish immigrants, the middle child of 11.

At the re-internment in Riverside, CA, more than 30 of Rosenkrantz’s relatives — nieces, nephews, their kids, and their kids — were present. Front and center was Dr. Rosenkrantz.

“My family and I would like to thank all of the people who helped locate our uncle and bring him home to be buried with his four brothers, who were also part of World War II and are buried at Riverside National Cemetery,” said Dr. Rosenkrantz.

Following the playing of “Taps” and the firing of a three-volley salute, the military honor guard folded the flag draped atop Rosenkrantz’s casket and presented it to Dr. Rosenkrantz.

“This is a day I have been hoping for over 20 years,” he said in his eulogy. “We now have some closure.”