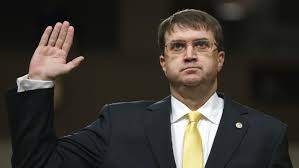 The Senate has confirmed Robert Wilkie to lead the Department of Veterans Affairs. The agency has been without a secretary since March 28th when President Trump fired David Shulkin, and unsuccessfully tried to replace him with Rear Adm. Ronny Jackson.

The Senate confirmed Wilkie’s nomination with a 86 to 9 vote. Wilkie has led the VA as acting secretary for two months until he was officially nominated for the position on a full-time basis.

The White House issued a statement from the president lauding the vote.

“I applaud the United States Senate for confirming Robert Wilkie as the Secretary of Veterans Affairs. Mr. Wilkie has dedicated his life to serving his country with honor and pride. He has displayed great patriotism and a commitment to supporting and empowering America’s armed forces and veterans,” Trump said in a prepared statement. “Under his leadership, I have no doubt that the Department of Veterans Affairs will continue to make strides in honoring and protecting the heroic men and women who have served our nation with distinction.”

Wilkie, 55, said he believed the VA should be central to veterans’ health care, but he enters the job in the midst of turbulent times marked by turnover and instability. He inherits a host of problems, including the task of completing President Donald Trump’s promise to give veterans the option of using the benefits they earned through military service to see private doctors rather than going to VA hospitals.

But Wilkie has the support of some veteran groups, including AMVETS and the American Legion

“On behalf of the two million members of the American Legion, I congratulate Mr. Robert Wilkie on his Senate confirmation to be the tenth secretary of the Department of Veterans Affairs,” said Denise Rohan, national commander for the American Legion.