Military Blog
You are here: Home / Wilkie Pushes for Culture Shift Within the Military 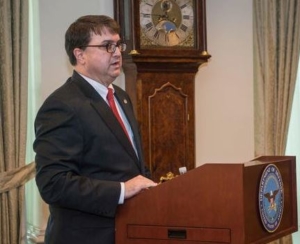 Robert Wilkie, the Department of Defense’s new undersecretary of defense for personnel and readiness, is shifting the emphasis of the military culture to create a more stable, family friendly environment.

Wilke is responsible for Total Force Management as it relates to readiness; National Guard and Reserve component affairs; health affairs; training; and personnel requirements and management, including equal opportunity, morale, welfare, recreation, and the quality of life for military families.

Wilkie understands that the constant moves made by servicemembers have a direct effect on their family members, limiting the career options of many military spouses, and prohibiting military children from putting down roots with friends and schools.

Wilkie, himself an Army brat, has walked the walk. He said, “If the families aren’t happy, the soldier walks.” Wilkie also serves in the Air Force Reserve.

Under the current system, troops are pushed out of the military if they don’t constantly advance along their career path. Wilkie said the Pentagon has come to the realization that it may need to change how the military operates in order to meet modern threats.

Wilkie credits growing up near Fort Bragg as great preparation for his new position. But he cites the readiness of the military as one of the issues that keeps him up at night. He said new planes are worthless if there are no people to maintain or fly them.

Family Sues USMC for $100M What Are Some of The Worst Duty Assignments? Scroll to top
Follow a manual added link