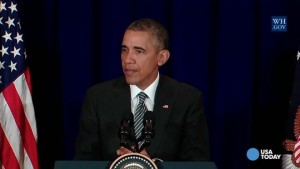 The Pentagon is investigating whether crucial ISIS intelligence reports were manipulated to reflect a more optimistic assessment of the American military campaign against the Islamic State.

President Obama said that he has told top military officials to “get to the bottom” of reports that intelligence assessments have been altered to give a rosier assessment of progress in turning back the Islamic State. He said that altering reports would be contrary to his wishes.

“One of the things I insisted on the day I walked into the Oval Office was that I don’t want intelligence shaded by politics. I don’t want it shaded by a desire to tell a feel-good story,” he said.

Obama said he didn’t know what that inspector general’s investigation would find regarding the ISIS intelligence reports. But he appeared to be more concerned about the issue than he’s been in previous responses, saying he’s asked Defense Secretary Ash Carter and the chairman of the Joint Chiefs of Staff, Joseph Dunford, to investigate.

Former Defense Secretary Chuck Hagel said he had not seen any evidence of altered ISIS intelligence reports during his tenure at the Pentagon, from early 2013 to February of this year.

Mr. Obama said he would not relent in the fight against the Islamic State, also known as ISIS or ISIL. He repeatedly described the group’s members as little more than thugs with guns who have little or no ability to “strike a mortal blow” against the United States or France.

Obama pledged to “take back their land” and “cut off their financing” and “hunt down their leadership” with what he called an intensifying strategy on all fronts.

He reiterated that Americans must not change the way they treat other people or demand unreasonable legal changes because they are fearful of another attack. He noted that Times Square in New York — not so far from the site of the Sept. 11 attacks — is filled with people.