Military Blog
You are here: Home1 / Wearable Technology May Determine Severity of TBIs 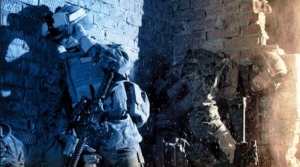 Modern body armor better protects warfighters against shrapnel from explosive blasts. However, they still face a hidden threat — the resulting blast pressure and shock wave which could cause traumatic brain injury (TBI).

Navy researchers are developing a wearable system that could help determine the severity of a brain injury, often called an invisible wound, following an explosion.

The Blast Load Assessment Sense and Test (BLAST) is a five-year, $30 million program that will use sensors in helmets to measure the shockwave thrust of an explosion.

BLAST uses coin-sized sensors which are tough enough to survive an explosion, can be worn on helmets and body armor, and are able to record blast pressure. This pressure can be downloaded with a specialized scanner, and design possibilities include a handheld, barcode-style scanner or a stationary one modeled after airport metal detectors. An algorithm will convert the data to determine if the affected warfighter needs an additional exam.

“When you’re injured mildly, you don’t want to get another injury on top of that because they don’t add up linearly,” said Dr. Timothy Bentley, program manager for the Office of Naval Research’s Warfighter Performance Department. “One plus one doesn’t equal two, but one plus one may equal three, even, because you’re weakened.”

Data from BLAST could signal when an affected warfighter needs to be pulled out for treatment or can return to the fight.

“BLAST sensors can provide valuable blast pressure data that can be used to assess the possibility of TBI,” said Dr. Amit Bagchi, a scientist at the Naval Research Laboratory, which is developing the physical sensors. “The more data we have, the better we can predict the presence of TBI.”

“We’ve learned a great deal about how brains get injured now, much more than we knew previously,” Bentley said.

BLAST could be tested in a year, although its rollout, if approved, is still several years away.

The program is sponsored by the Washington-based Office of Naval Research and involves its Naval Research Laboratory, the University of North Carolina, NASA and New Mexico-based research firm Applied Research Associates Inc.

Who Are the Harlem Hellfighters?The Best Answers for Law Enforcement Interview Questions Scroll to top
Follow a manual added link