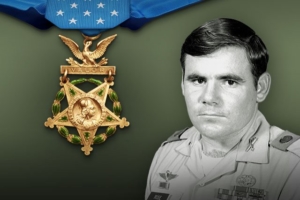 As Director of Employer Engagement for California Employer Support of the Guard and Reserve (ESGR), I had the pleasure of meeting Retired Army Capt. Gary “Mike” Rose at a September ESGR event.

Rose, a Vietnam veteran, will receive the Medal of Honor on October 23rd.

In 1967, Rose decided to volunteer for the Army.  Thanks to high aptitude test scores, jump school and Special Forces training followed, and by October 1968, he was a Special Forces medic.

In 1970, Rose, a Green Beret, participated in Operation Tailwind, a classified mission in support of the Royal Lao Army, creating a diversion aimed at North Vietnamese Army troops.

While serving as a medic with Military Assistance Command, Vietnam — Studies and Observations Group, 5th Special Forces Group, Rose “repeatedly ran into the line of enemy fire to provide critical aid to his comrades, using his own body on one occasion to shield a wounded American from harm,” according to the White House.

Despite being wounded on the final day of the mission, Rose helped move wounded personnel to a helicopter extraction point.

Over the four-day battle, Rose is credited with treating between 60 and 70 wounded troops, saving numerous lives.

Rose has asked the White House to include his fellow MACV-SOG veterans in the ceremony, as well as the Marines and Air Force personnel who supported the mission, particularly the A-1E Skyraider and AH-1 Cobra pilots who were there.

“To me, this medal is a collective medal, and it honors all those men who fought.”

In spite of the fact that Rose has only just taken up playing golf in the last few years, he is no stranger to hitting a hole in one.   I suggested he might consider buying a lottery ticket.