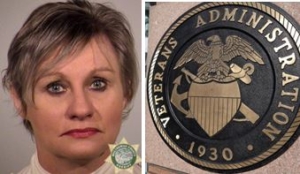 Ami Diane Phillips, a Department of Veterans Affairs therapist, is at the center of a $500,000 lawsuit against the VA.

Luke Kirk, a veteran who was being treated by Phillips, alleges that he suffered emotional distress due to sexual advances, and that Phillips punished him when he refused to marry her.

In January, 2017, Phillips was convicted of two misdemeanors for making up a story that Kirk was going to kill her, warning hospital staff that Kirk was either coming to the facility or going to hurt her family. But in fact she was seeking retribution against Kirk for saying that he was going to report her sexual advances.

Phillips began treating Kirk in November 2015, according to the lawsuit. But she’d begun forming a social relationship with Kirk by late April 2016 while still providing care to him.

“Phillips engaged in behavior that fell below the professional standards for a social worker, including physically touching, hugging, and kissing during mental health treatment sessions,” according to the lawsuit.

“Phillips used her position and influence to induce (Kirk) to trust her enough to agree to a personal relationship with (her) that ended only when Phillips tried to kill herself and/or (him) during a social outing to the beach,” the lawsuit claims.

They exchanged 4,000 text messages between their personal cellphones, went out for drinks and Phillips would even visit his home.

At one point, she asked Kirk to marry her and raise an adopted child together, the court documents claim, but he rebuffed her advances.

Kirk claims the VA should be liable for his therapist’s misconduct.

Kirk has suffered “from fear of criminal prosecution, interference with his progress in therapy, loss of trust in other medical or mental health providers” along with a slew of emotional issues because of the ordeal, according to the lawsuit.