Military Blog
You are here: Home1 / VA to Change the Procedure for Confirming Veterans’ Deaths 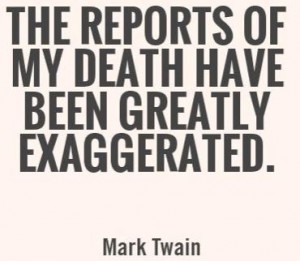 Mark Twain wrote, “The reports of my death have been greatly exaggerated.” And now some veterans are echoing Twain’s words. The federal government is taking responsibility for wrongly declaring more than 100 veterans dead, when they were, indeed, still alive. As a result, the government is changing the way it is confirming veterans’ deaths.

The mistakes caused the suspension of benefit payments, causing many to suffer a temporary financial hardship.

U.S. Rep. David Jolly (R-FL) brought the issue to the Department of Veterans Affairs’ attention in a November letter. Jolly has been a leader in the ongoing fight to protect and provide for our nation’s veterans. He co-sponsored legislation to improve healthcare for veterans by creating more private sector options for care, authorizing additional medical staff, and increasing the number of healthcare facilities.  Jolly also introduced legislation that gives veterans the opportunity to choose if they want to receive care within the Veterans Health Administration, the Department of Defense facilities, or private sector providers

The VA verifies its beneficiaries’ entitlement through an automated match with the Social Security Administration’s Death Master File.

Now, the department is “updating its process to request further confirmation of the beneficiary’s death before it terminates payments,” VA spokesman Randal Noller said. “Although these types of errors are a small percentage, we sincerely regret the inconvenience caused by such errors.”

When VA officials think a veteran has died, a letter will be sent to his or her address, requesting confirmation of the death from a surviving family member. If the VA fails to hear from the family — or from a veteran erroneously believed dead — only then will the department terminate payments.

While the VA attributed blame to both computer and human error, Jolly expressed his gratitude that the department took action.

USS Harry S. Truman Deployed in Fight Against ISISAssisting Veterans in a Number of Ways Scroll to top
Follow a manual added link