Military Blog
You are here: Home1 / When the U.S. Coast Guard & Navy Took Down Head of the Cuban Maf... 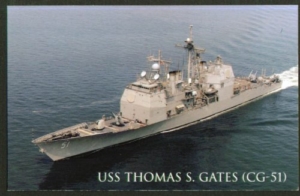 The USS Thomas S. Gates (CG-51) was a U.S. Navy flight-I Ticonderoga-class cruiser that was named after Thomas S. Gates, Secretary of Defense in the last years of the Eisenhower Administration (1959–1961).

The ship was the only vessel of the class to be named after a person; all of the other cruisers are named after famous battles in American history. But that’s not the Gates’ only claim to fame.

La Corporación worked in cahoots with the Italian mob and grew into an enterprise worth more than a $1 billion. La Coporación frequently used intimidation, contract murders, and arson.

In 2004, both the Battles were arrested in a huge federal sweep that targeted their gang. Battle Sr. died in custody three years later. Battle Jr. served more than a decade in federal prison, and was released in November, 2017.

According to “The Corporation: An Epic Story of the Cuban American Underworld” an upcoming book by T.J. English, the Pentagon and the chairman of the Celebrity Cruise Lines arranged a rendezvous point for the two ships to meet. The team had 12 hours to detain Battle Jr. before the cruise ship returned to Costa Rica territorial waters.

At least six members of the Coast Guard law enforcement detachment, clad in tactical gear and face masks, boarded the cruise ship and in just a matter of minutes, Battle Jr. was in custody.

Hollywood has since taken interest in the Battle family’s story. The movie, currently titled “The Corporation” is due to be produced by Paramount and Leonardo DiCaprio, starring Benicio del Toro as Battle Sr.