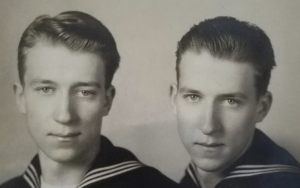 Identical twins Julius “Henry” Pieper and Ludwig “Louie” Pieper from Creston, Nebraska were inseparable, which is why the 19-year-old brothers died together at Normandy. While their service on the same ship ran against standard military policy, they had pleaded with their father to approve their service together.

Their father wrote a letter to their commanding officer saying, “My boys came into the world together, they want to serve together, and if they go down together, so be it.”

Their tank landing craft was shattered while trying to reach Utah beach on D-Day.

While Louie’s body was found, identified and laid to rest, his brother’s remains were not recovered until 1961, and not identified until 2017. As technology advanced, the Department of Defense increased its efforts to identify the thousands of lost American service members from World War II, Korea and Vietnam.

Julius was previously buried at a World War II American cemetery in Belgium. In 2015, Pentagon officials decided to dig up the unknown remains buried within all of the American Battle Monument Commission’s cemeteries.

The twins final reunion, 74 years in the making, is due to Nebraska high school student Vanessa Taylor doing a history project. She was able to conclude what the military had not: same last name, same birth date, and same date of death. Julius was moved and laid to rest beside his twin brother.

The Pieper twins were both radiomen second class enlisted together in the Navy. Both were on the same flat-bottom boat, Landing Ship Tank Number 523 (LST-523), making the crossing from Falmouth, England, to Utah Beach 13 days after the June 6 D-Day landings. Their mission was to deliver supplies at the Normandy beachhead and remove the wounded.

But the vessel struck an underwater mine and sank off the coast, killing 117 of the 145 Navy crew members aboard.

The Pieper twins were given full military honors.

Inseparable in birth, in life and now, finally, in death.