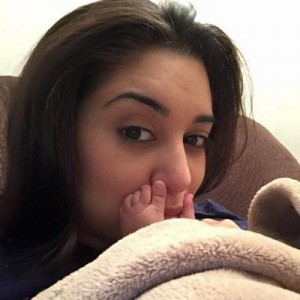 Making this tragedy even worse, lying next to Ramirez was her 5-month-old daughter. Fortunately, the baby was unharmed and was transported to the hospital as a precaution. She was turned over to unnamed members of Ramirez’s family.

Ramirez’s body was discovered after a neighbor noticed that a door to her townhouse was open and her dog was wandering around outside.

The Army Criminal Investigative Command at Fort Meade will assist police with the investigation.

Ramirez’s Severn neighborhood, about 2 miles from the base, is full of military families constantly moving in and out, according to residents Alvin Zeno, a neighbor of Ramirez, said that he had heard gunshots over the weekend.

“I’ve been in the Army 25 years. So I know what shots sound like. I said, ‘Somebody is firing somewhere,'” Zeno said.

Ramirez was married, according to county police spokesperson Lt. Ryan Frashure. Police have interviewed her husband a couple of times, and Frashure described him as “accessible” and “answering questions.”

It is unclear if the attack is the result of a random violent act or a domestic disturbance.

Serving as a specialist, Ramirez was a doting mother, changing her Facebook profile pictures to photos of her with a baby girl.

Local law enforcement and Army investigators continue to seek answers in the shooting death, but have not identified any suspects

Police have requested that anyone in the area at the time of the incident or with information regarding the case contact them by calling 410-222-4700, or via www.metrocrimestoppers.org. Tips can be given anonymously.

“It may not seem like a lot of information to them, but it could be a vital piece of the puzzle,” Frashure said.