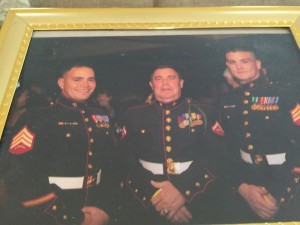 On Memorial Day, Robert D. Ford took part in a wreath-laying ceremony in Pennsylvania. The 75-year-old wore his Marine dress uniform and played a bugle. Afterwards, Ford attended Artsfest, a local arts festival. An Army soldier also in attendance thought something was not quite right about Ford’s uniform.

The soldier enlisted the help of a Harrisburg police officer working at the event, who is a former Marine, and together, they accused Ford, 75,  of being a fraud.

“He’s not a real Marine!” the officer shouted to the crowd. “Stolen valor!”

The only problem is Ford did serve in the Marines from 1958 to 1964. He earned the rank of lance corporal. There was no stolen valor — just a false accusation that left Ford humiliated.

“He’s as legit as you can get,” said Doug Sterner, a Vietnam veteran and archivist from Pueblo, Colo., who is nationally recognized for detecting military fraud. Sterner has worked to build a database of military awards and has also become pretty great at spotting frauds. He confirmed Ford’s military service this week through Headquarters Marine Corps, and said that this is trend of veterans becoming vigilantes is troubling.

The federal “stolen valor,” law was struck down in 2012, and a meeker version passed in its place. Under the new law, few cases are being investigated or prosecuted against people who falsely claim military awards or service, Sterner said.

“The veteran community, frustrated and upset, is saying, ‘OK. We’ll do it ourselves,’ ” Sterner said. “But what it’s leading to is a bunch of hot heads. … There’s a lot of bullying going on in the community now. It’s almost like hunting game, going out looking for phonies.”

A witness said that the ordeal lasted about 10 to 15 minutes.

But, to Ford, it probably felt like an eternity.