Military Blog
You are here: Home1 / Soldier Presented With Helmet That Saved His Life 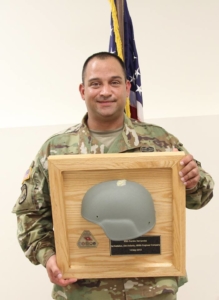 Staff Sgt. Frankie Hernandez might not be around today were it not for his Army-issued advanced combat helmet.

In 2012, Hernandez, a platoon sergeant with the 668th Engineer Company of the Orangeburg, New York Army Reserves was on his 22nd mission in Afghanistan when an enemy bullet struck the top of his head. Hernandez was driving an up-armored D7 bulldozer in Afghanistan during an operation to build a road that would serve a U.S. Army infantry unit.  His unit stopped to determine the best route of approach.

“Two infantry captains were leading the way,” he said. “I dismounted my dozer; we were looking at the map. And all of the sudden, we heard like a loud noise coming from the engine compartment of the bulldozer. The captain that was on my right asked me what it was,” Hernandez said. “As I turned to answer — I don’t remember what I was going to say to him — I felt the impact on my helmet, and on my head.” The noise turned out to be an enemy bullet hitting the bulldozer’s engine block.

“As I turned to answer … I felt the impact on my helmet; I was kind of numb,” Hernandez said. “I didn’t know what had happened, so I told the captain I think I got hit.”

Hernandez said he was thankful to all the soldiers in his platoon that day.

“For a split second … it felt like I was alone and all of the sudden, I had backup out of everywhere, they came and they had my back. And that was such a relief,” he said.

Hernandez received the Purple Heart in July of 2012 for the wounds he received that day.