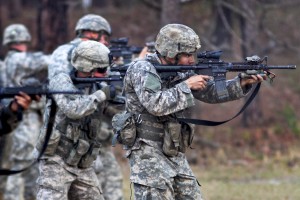 In facing future security challenges, taking current and future defense strategies and budgetary constraints into consideration, the Army of tomorrow may be smaller and leaner. It may be an Army that is agile, flexible, and rapidly deployable. But tomorrow’s Army may also have an impact on the part-time soldiers in the Army Reserve and National Guard, resulting in more frequent deployments

The Army is looking at ways to blend its active-duty and Reserve branches in a time of tightening budgets.

“After 12 years of war, we need to ask the Army, ‘what capabilities don’t you have now, and what capabilities perhaps do you wish you did?’ ” said Thomas Lamont, one of three members of the National Commission on the Future of the Army. Lamont, a former assistant secretary of the Army for manpower and Reserve affairs, has been interviewing military leaders, observing training and participating in an open forum to hear from veterans.

The commissioners have been traveling around the country, talking to governors who want to maintain a robust National Guard. Ten years ago, approximately 115,000 citizen soldiers were on overseas orders, which limited their ability to respond to domestic emergencies.

Currently, about 10,000 National Guard members are activated for federal assignments, National Guard Chief Gen. Frank Grass is pushing for his troops to do more.

“The Reserve component is not being utilized as much as they would like, and they believe they have capacity and desire to provide a more important role,” Lamont said.

The active-duty Army is shedding about 120,000 soldiers from its peak strength at the end of the Iraq War of about 570,000 troops. The Army drawdown will likely be achieved in large degree by controlling accessions (the number of people allowed to join the Army). If limiting accessions is not enough to achieve the desired end strength targets, the Army can employ a variety of involuntary and voluntary drawdown tools, such as Selective Early Retirement Boards and Reduction-in-Force.