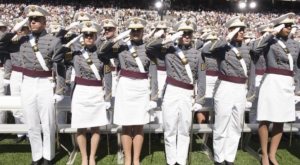 For the fourth year in a row,  sexual assault reports increased at the U.S. Military Academy in West Point, New York. The 50 cases reported during the school year nearly doubled from the prior year, up from 26.

Both the U.S. Naval Academy and the U.S. Air Force Academy saw only slight increases.

The Defense Department did try to put a positive spin on the latest numbers, saying that more people were feeling emboldened to report sexual abuse and that students are aware of treatment programs, showing confidence in the system.

Reporting a sexual assault is difficult for any victim, under any circumstance.  For those at military academies or serving in the military, the difficulty is compounded by the close living conditions inherent in there. Also, sexual assaults are sometimes accompanied by collateral misconduct (e.g. fraternization, sex in the barracks, breaking curfew, or underage drinking) on the part of the victim; issues which are either minor violations or non-existent rules at civilian schools but carry severe sanctions at the Academies.

The reports will rekindle a problem that has plagued the military as increasing numbers of women join the armed services. The increase in sexual assault reports in the service academies is similar to what is happening in the military as a whole.

“We are absolutely committed to making the Academies safe,” Robert Wilkie, Under Secretary of Defense for Personnel and Readiness, said in a press release. “It is imperative that these future officers understand how eliminating sexual harassment and assault advances our ability to protect the nation.”