Military Blog
You are here: Home1 / Why the Secret Service Maxed Out Just Six Months into Trump Administra... 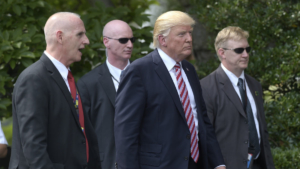