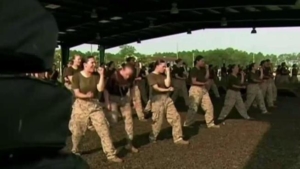 According to the Defense Department’s Annual Report on Sexual Assault in the Military, servicemember reporting of sexual assault increased by about 10 percent in fiscal year 2017.

Although the increase in reporting occurred across all four military services, the overall increase was spiked by a nearly 15-percent surge in sexual assault reports in the Marine Corps. Both the Navy and the Air Force saw increases of more than 9 percent, and the Army went up 8 percent.

The report for fiscal 2017 says the department received 6,769 reports of sexual assault involving service members as either victims or subjects of criminal investigation, a 9.7 percent increase over the 6,172 reports made in fiscal 2016.

“Every sexual assault in the military is a failure to protect the men and women who have entrusted us with their lives,” said Navy Rear Adm. Ann M. Burkhardt, the director of the Defense Department’s Sexual Assault Prevention and Response Office. “We’ll be redoubling our efforts to advance prevention initiatives that create a military free from sexual assault,” she said.

Dr. Nathan W. Galbreath, deputy director of the Sexual Assault Prevention and Response Office, noted that about 1 in every 3 military members now choose to report their sexual assault, up from about 1 in 14 in 2006.  “We’re seeing a bigger slice of the problem — in other words, more people coming forward to participate in the justice system, to get the help that they need, and to give us a chance to hold offenders appropriately accountable,” he said.

Retired Army Col. Ellen Haring, Director of Research and Programs at Service Women’s Action Network, added that the military is not only failing to hold perpetrators accountable but that those service members who do report sexual assault are still highly likely to experience retaliation.

“In the FY2017 report, 70% of a representative sample of victims report some form of personal or professional retaliation after coming forward,” she said.