Military Blog
You are here: Home1 / Is Privatization of the VA an Option? 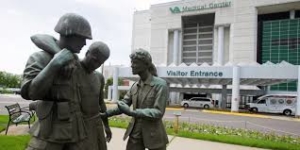 Is  Privatization of the VA an Option?

The Department of Veterans Affairs has been offering care since the World War II era, starting with the then-Veterans Administration’s Hometown Program that began in 1945. Now there is talk abounding that the VA is headed towards privatization. But exactly what is the definition of what privatization of the VA would be?

On the VA website, an article titled “Debunking the VA Privatization Myth” quotes House Committee on Veterans’ Affairs Chairman Phil Roe saying, “If we’re trying to privatize, we’re not doing a very good job,”…”We’ve gone from 250,000 employees in the VA in 2009 to 370,000 employees, and we’ve gone from a $93.5 billion budget to what the president’s asked this year is $198 billion. It sounds like we’ve been an utter failure if we’re trying to privatize.”

About $72 billion of VA’s budget this fiscal year goes to medical care, and the department has more than 1,200 medical facilities nationwide. But veterans groups contend that the increase has more to do with inflation and increased demands on the VA than anything else.

There is bipartisan opposition on Capitol Hill to any type of privatization efforts.

During his failed campaign for the Republican presidential nomination, Dr. Ben Carson floated the idea of issuing health care vouchers to veterans, allowing them to choose where to have their care.This would be similar to the  Veterans Choice Program, one of several VA programs through which a Veteran can receive care from a community provider, paid for by VA.

For example, if a veteran needs an appointment for a specific type of care, and the VA cannot provide the care in a timely manner or the nearest VA medical facility is too far away or too difficult to get to, then a veteran might be eligible for care through the Veterans Choice Program.

Veterans must receive prior authorization from the VA to receive care from a provider that is part of VA’s VCP network of community providers. The authorization is based on specific eligibility requirements and discussions with the veteran’s VA provider.

The battle over privatization will depend on how much medical care should go outside the department’s existing infrastructure, and what counts as too much reliance on the private sector.