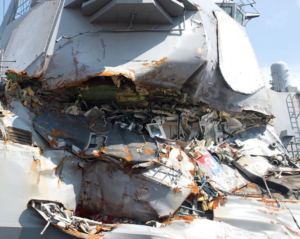 The three top officers aboard Navy warship Fitzgerald that collided with a freighter off the coast of Japan were relieved of their duties. They are the commanding officer, Cmdr. Bryce Benson, Cmrd. Sean Babbitt, and Master Chief Petty Officer Brice Baldwin. Additionally, nearly a dozen sailors face disciplinary action, including all those on watch the night of June 1.

The Navy released a partially redacted report on the investigation of the collision between the Fitzgerald and the ACX Crystal. One of the Navy’s deadliest accidents in years, the collision resulted in the loss of seven sailors.

Vice Chief of Naval Operations Adm. William Moran said the actions are to be taken shortly, although the Navy’s investigation is still ongoing. A statement from the fleet said “inadequate leadership” had contributed to the collision.

Adm. Moran said that the bridge team, the sailors responsible for keeping watch on the ship’s bridge to ensure it remains safe, had “lost situational awareness,” leaving them unable to respond quickly enough to avoid the disaster once the oncoming container ship was seen.

According to the report, dozens of sailors who were rocked from their slumber raced in the dark to escape their flooding quarters. Within 90 seconds, seawater was at first waist-deep, then neck-high as sailors pushed aside floating debris to climb a ladder to safety.

Two sailors were credited with taking extra steps to help others out of the flooded berthing space that saved the lives of at least two of their shipmates. The last sailor pulled from the chaos was underwater when his shipmates yanked him up.

“No damage control efforts, however, would have prevented Berthing 2 from flooding completely within the first two minutes following the collision, or the deadly circumstances in that situation,” the report said.

The 9,000-ton, $1.5 billion Fitzgerald, operating out of the Yokosuka naval base, was wrapping up a long day of training. The 29,000-ton Crystal, which is more than 200 feet longer than the Fitzgerald, had been chartered by a Japanese company to bring cargo from Nagoya, on Japan’s central coast, to Tokyo. The Crystal sustained far less damaged than the Fitzgerald.