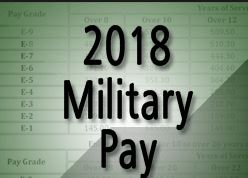 The first paychecks for servicemembers reflecting the 2.4 percent pay raise will be going out on January 15th. The raise is part of the National Defense Authorization Act.

This was only the second time since 2010 that the pay raise has topped 2 percent.  It was 2.1 percent last January.

The increase will put an additional $680 in the wallets of younger enlisted ranks, and about $1,080 a year for more senior enlisted and junior officers. Mid-career officers can expect almost $2,000 a year extra.

The 2.4 percent figure is also the mark mandated as the standard pay raise under federal law.

Government employee unions had argued for pay parity between the military and federal workers, but President Trump ordered an average raise of 1.4 percent, with an additional average of 0.5 percent adjusted in locality pay, for a total of a 1.9 percent pay increase for federal civilian employee, which was also effective January 1st.

The 2018 Basic Allowance for Housing (BAH) rate increase will see on average a .7 percent increase, but falls far short of the 2.9 percent that was proposed.

TRICARE Standard and Extra will become TRICARE Select, and there will be changes to copay amounts and pharmacy prices. But probably the biggest change in 2018 involves the military retirement system. The Blended Retirement System (BRS) blends a fixed pension system like the military has always had, with a user-contributory system, the Thrift Savings Plan.

Service members with less than 12 years active duty on Jan. 1, 2018 will have a limited time to decide if they want the new system or an older one. New military members will be automatically enrolled in the BRS.