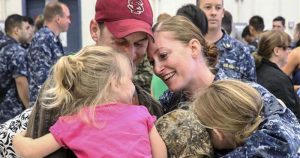 The Second Lady of the United States, Karen Pence, is using her new cachet to call around on behalf of military spouses, looking to help them overcome the challenges that come with being wed to active-duty service members.

The vice president’s wife has announced a new campaign that allows military spouses be reimbursed by the federal government for licensing or certification renewal costs. She sees these spousal challenges as key to military readiness. Unhappy spouses lead to unhappy service members who eventually will quit. Mrs. Pence wants to elevate, encourage and thank military spouses.

“In the Trump administration, we feel it is imperative we support our military spouses and children,” said Mrs. Pence. “Spouses do so much and ask for so little.” She referred to them as the “backbone” of their families.

Mrs. Pence, who has a son in Marine flight school and a daughter-in-law in graduate school, said she wants to be a voice for military spouses.

The effort seems to be a follow-up to Joining Forces, Michelle Obama’s and Jill Biden’s initiative to care for military families. Mrs. Pence wants to apply her influence to try to make a difference.

“Nobody elected me, nobody voted for me,” Mrs. Pence said. “They don’t want me writing policy, and I don’t intend to. But what I do know I could do is I can speak to as many spouses as possible and encourage them and uplift them and connect them.”

Mrs. Pence has participated in numerous round table discussions with spouses from all branches of the U.S. military in the nearly two years since she assumed her new role, both around the U.S. and in other parts of the world. She and the vice president have lived in 14 homes during their 33-year marriage, so she gets it.

She was handing out “comfort kits” to children that include an animated video, a guided journal and a teddy bear. She and the spouses of nearly 30 members of Congress assembled 500 of the kits last week.