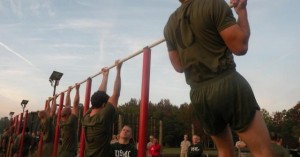 Sailors are getting a reprieve from the much maligned neck-and-torso tape test. But Marines now have something new to be upset about: the Navy Secretary said the change won’t apply to his whole department. This means that Marines are stuck with the test that many view as inaccurate and unfair. It also means that fitness standards for sailors will allow higher body fat percentages.

The tape test has a notoriously high margin of error, and is not an actual measurement of body fat, but instead relies on a neck-to-waist ratio to estimate body fat, which is a particular problem for Marines who are muscular or have a small neck.

The Navy changes are part of an initiative pushed by Navy Secretary Ray Mabus to focus on holistic health, curb risky weight-loss methods including starvation, dehydration and the use of questionable supplements.

The Corps “already has a strong fitness culture,” Mabus said, which is why the change won’t apply to Marines.

The Navy has released a host of changes to their fitness regulations in response to critiques from sailors who crammed to make weight under the former system, similar to the test used by the Air Force.

Navy officials say they wanted to move away from a system that punishes sailors for failing fitness tests and instead implement one that encourages year-round fitness. Other Navy initiatives include healthier food choices. Instead of fried foods being offered in their chow halls, sailors will now be introduced to color-coded dishes, with green labels indicating the healthiest choices.

The Navy also plans to run a pilot program in the Pacific Fleet and Navy Reserve using fitness trackers that you can strap to the body, like Fitbits. But this idea has met with much resistance.

Vice Adm. Bill Moran, chief of naval personnel, said, “Fitness should truly be about being healthy and mission readiness — are you physically fit for times of combat and stress in the fleet?”