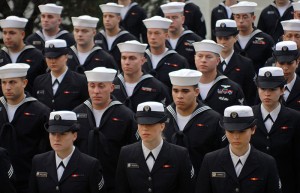 The U.S. Navy has announced a series of initiatives aimed to retain its best of its brightest young sailors.

In an effort to avoid a recruiting problem similar to the one the Army is facing, Navy brass has concentrated on improving benefits, including programs for maternity leave, child care and education and mid-career internships with industry. In a healthy economy, junior and mid-grade officers and enlisted can take their skills to the private sector for more pay.

Currently, the economy is on an uptick, so the Navy must work harder to compete with the private sector to bring in new sailors and keep them when their service obligations end. For many sailors, incentives that would benefit their careers or personal lives, like preferable assignments or favored bases, could be as important, or more so, than money.

“If you want to be retaining and recruiting the best and brightest, you’ve got to offer them a career model that is competitive to what they’re being offered on outside,” said Todd Harrison, a military budget expert at the Center for Strategic and International Studies.

While many of the initiatives pertain to both male and female members of the Navy, a handful of the emphasized proposals, such as extending maternity leave and childcare hours, were aimed at appealing to women and families in the Navy.

The Navy’s Career Intermission Program (CIP) is an effort to allow members of the Navy to spend time away from the service, and then return, without damaging long-term advancement. CIP  allows Navy members to spend time in academia or the private sector as part of their overall career path in the service.

Along similar lines is the Navy’s internship program with private industry. The Navy is partnering with Fortune 500 CEOs to create what’s called the “Secretary of the Navy Industry Tour.” This program will allow commanders to send their officers to work at U.S. companies for a period of time before returning to the Navy. The internships last nine months, paid for by the Navy, and allow sailors to learn business practices, techniques and technologies.