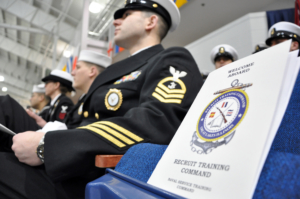 The Sea Services have a rich history, and there is much to be learned from history on multiple battles, strategies, tactics, leadership, values and traditions.   To this end, the U.S. Navy is sponsoring an essay contest. Essay topics can include the study of the history of the United States Navy as well as any other historical, maritime history that relates to maritime strategy.  The history of the United States Navy is divided into two major periods: the “Old Navy”, a small but respected force of sailing ships that was also notable for innovation in the use of ironclads during the American Civil War.  The second major period is the “New Navy”, the result of a modernization effort that began in the 1880s and made it the largest in the world by the 1920s. The United States Navy states that October 13, 1775 is the date of its official establishment, when the Second Continental Congress passed a resolution creating the Continental Navy. The essay contest is open to both professional and amateur historians, and should relate in some way to establishing and maintaining maritime superiority in today’s environment.  The essay should provide readers with a lesson learned from history that can be applied to today.

The goal is to inspire insight and dialog from across the widest spectrum of academic, operational, military and civilian personnel both from within the Naval Services and those with a sincere interest in the history of the Navy, Marine Corps, and Coast Guard.

Submissions cannot exceed 3,500 words (excluding footnotes/endnotes/sources), nor can an entry contain the author’s name. So, a separate attachment including a biography and complete contact information is required. Submission packages should be emailed to [email protected] with the subject heading ‘CNO 2017 Naval History Essay Contest’ no later than June 30, 2017. For more information visit the U.S. Naval Institute website or contact Fred Rainbow at (410) 295-1092.