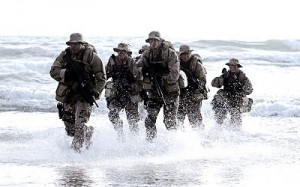 MilitaryConnection previously reported that the U.S. Army is deciding whether or not to proceed with a pilot program to integrate female soldiers into the elite Army Ranger school. Apparently, U.S. Navy leadership is also deliberating on whether or not to integrate women into their Sea, Air, Land (SEAL) teams or Special Warfare Combatant Crewman units. A report from a U.S. Special Operations Command was due in July, 2014, but the completion of the report or its findings have not been confirmed.

The Secretary of the U.S. Department of the Navy (SECNAV) Ray Mabus has made a deliberate effort to expand the inclusion of women Navy-wide. Mabus has supported admitting women to SEAL teams, as well as other Naval Special Warfare (NSW) units. The NSW community remains the last area in the Navy that prohibits women from joining. Within the past year, the Navy opened the  Coastal Riverine Force, as well as the attack submarine community, to women.

In March, 2014, the Navy opened up 267 riverine billets to women, with 21 more billets for the joint terminal attack controller enlisted classification added in September. The first female attack sub officers will report to the USS Virginia (SSN-774) and the USS Minnesota (SSN-783) in January, 2015.

In a meeting with the press on September 30, 2014, the SECNAV stated that he hadn’t heard whether or not a report had been submitted to the DOD about adding women to SEAL teams. But he did express his opinion on the subject.

“In my opinion, if people meet the qualifications, I don’t think gender should matter,” Mabus said. He later added, “The thing I keep saying about SEALs, about special warfare, is eighty percent of men don’t make it. So we know what the standards are. If you can make it, I don’t see where gender has much of a place.”

The current push to integrate women into all communities and occupations in all branches of the U.S. Military began in February, 2012. When then-Defense Secretary Leon Panetta announced that the DOD would allow women in the ranks to fill billets in ground combat units at the battalion level. This opened over 14,000 billets to women across all branches of service. In 2013, the Navy began opening up the last jobs closed to female sailors.