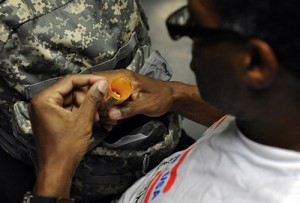 In most cases, anyone with a medical complaint is prescribed medication in an attempt to manage their symptoms. The results of a recent survey revealed that one third of Veterans polled said that they are on at least ten different medications.Hundreds of thousands of Veterans have been prescribed opiates for pain.

There are thousands of Veterans who have turned to self-medicating, using illegal drugs and alcohol, in an attempt to manage their pain and PTSD symptoms. There are also Veterans who overmedicate, using more of their prescribed medications than directed by their doctors.

It has been estimated that service members and Veterans are prescribed narcotic painkillers three times more often than civilians. But despite their pain and PTSD symptoms, an increasing number of Veterans are choosing to stop taking their medications.

While some Veterans admit that using illegal drugs, alcohol and prescription medications do affect their symptoms, there are others who have come to the realization that they are just trading one condition (pain) for another (substance dependency).  Unfortunately, the latter feel that they are better off without their prescribed medications.

Patients should never go against their doctors’ orders, especially when it comes to medications. Taking too many can be just as dangerous as taking too few. It is strongly recommended that Veterans take their prescribed medication, as directed, and only stop taking it after consulting their doctor.

With that being said, if Veterans feel that they don’t like the way that their medications make them feel, they should bring the subject up to their health care providers, and try to have their meds changed **or** even eliminated.