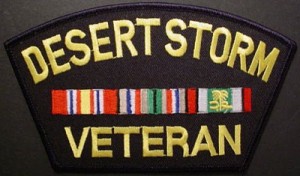 Earlier this month, the U.S. Department of Veterans Affairs (VA) rejected a request made by Veteran advocates and select members of Congress to list specific ailments as presumptive conditions for Desert Storm Veterans. These ailments included lung cancer, brain cancer and migraine headaches. The VA findings revealed that they could not prove high rates of these afflictions among Gulf War I Veterans are connected to military service.

If a Veteran is diagnosed with a presumptive condition, the VA is required to assume that the condition is service-connected. This means the affected Veteran would be entitled to medical and/or disability benefits through the VA.

Veteran advocacy groups claim that during their deployments to Iraq and Kuwait in the early 1990’s, service members’ exposure to Sarin gas and burning oil fields have resulted in the Veterans contracting these ailments.

Officials from the VA countered by claiming that the number of brain cancer deaths for Desert Storm Veterans exposed to Sarin gas was too minimal to be considered conclusive. The VA also claimed that the rate of lung cancer deaths is inconclusive, because the research that substantiated the claim did not account for how many of the service members used tobacco products.