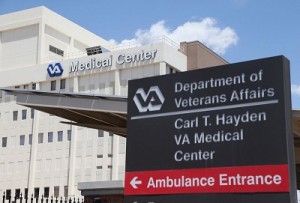 On October 6, 2014, the Deputy Secretary of Veterans Affairs (VA) Sloan Gibson proposed the removal of the Deputy Chief Procurement Officer (DCPO) for the Veterans Health Administration Procurement & Logistics Office. The VA also announced the firing of three other senior officials.

Deputy Secretary Gibson proposed the removal of  DCPO Susan Taylor following an investigation by the VA Office of Inspector General (OIG) in which allegations of conduct prejudicial to the government were substantiated. According to reports from the OIG, the investigation found that Taylor had inappropriately influenced the awarding of VA contracts to a private company, and interfered with an investigation into the matter.

The other three firings are also a direct result of wrongdoing discovered by the OIG and the Office of Accountability Review. Affecting three directors of VA healthcare facilities, siting significant delays and wait times for treatment, manipulation of appointment data, neglect of duty, inappropriate handling of VA contracts, and misconduct at VA facilities.

Terry Gerigk Wolf, the director of the VA health care systems in Pittsburgh, PA, is in the process of being fired by the VA for conduct “unbecoming a senior executive.” Wolf has been on administrative leave since June, and does have the right to appeal the decision before the firing is complete.

John Goldman, the director of the VA medical center in Dublin, Georgia, is also in the process of being fired after the VA’s inspector general revealed that the hospital’s staff knowingly closed out over 1,500 patient appointments in an attempt to cover up long wait times. The deceit, under Goldman’s watch, was an attempt to meet goals set by the VA. Goldman announced his retirement just four days before his removal was made public.

The VA is also firing the director of the Central Alabama VA Healthcare System, James Talton. The OIG confirmed that a lack of trained appointment schedulers contributed to delays and dysfunction in the hospital’s podiatry clinic. VA audits showed that more than 6,000 patients waited at least 90 days for care at Talton’s facility this year, and that some schedulers were instructed to hide long wait times.

The removal of Taylor, Wolf, Goldman, and Talton underscore the VA’s stated commitment to hold leaders accountable and get Veterans the care they need.