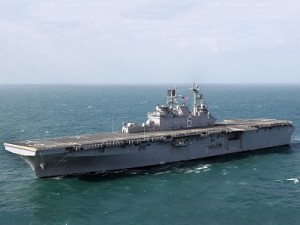 On July 11, the USS America, a Landing Helicopter Assault (LHA) ship  set off from the Ingalls Shipyards in Pascagoula, Mississippi. The ship is headed to her new home port of San Diego, CA.

The USS America is the fourth ship in the U.S. Navy’s history to bear the name of our country. The first USS America  launched in 1782, and was given to France. The second USS America was originally the German ocean liner SS Amerika, which was seized during WWI, and was used to transport U.S. troops. The most recent USS America was a KittyHawk-class aircraft carrier that was commissioned in U.S. Naval Service from 1965 to 1996.

The second America Class, the USS Tripoli (LHA-7), was laid down in June. The America-class ships differ from the older Tarawa-class LHA’s and most other amphibs in that that they do not have a well deck. Well decks are used by other amphibious ships to launch and recover landing vessels. Amphibs take on water in their ballast tanks and fill their well decks with water, so that landing vessels, including Landing Craft Utilities and Landing Craft Air Cushions (hovercrafts) can transport Marines and supplies to and from a beachhead. The lack of a well deck on the America-class is intended to give them more room to carry aircraft, essentially making them smaller aircraft carriers. After initial testing of the USS America, the Navy has stated that it is likely that all LHA’s after LHA-7 will once again have well decks.

The USS America went underway from Pascagoula with expected port visits in Guantanamo Bay, Brazil, Chile, Columbia and Peru. The America is scheduled to be commissioned on October 11, 2014 during Fleet Week in San Francisco.

The USS America is slated to replace the USS Peleliu, which is scheduled to be decommissioned on March 31, 2015.

The staff at Military Connection would like to wish fair winds and following seas to the USS America and her crew, and welcome the newest LHA to the fleet.