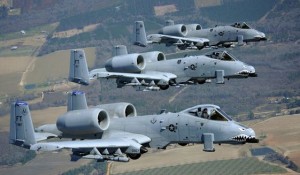 Maj. Gen. James Post, the vice commander of Air Combat Command (ACC), has been reprimanded and relieved of his command for comments he made regarding the A-10 Thunderbolt.

The two-star Air Force general expressed his opinion that it was “treason” for airmen to tell Congress about their support for the A-10 Thunderbolt.

Gen. Herbert J. “Hawk” Carlisle, the ACC commander, released a statement in which he said, “Gen. Post understands the impact of his actions and has expressed his sincere regret to me, a regret he extends to all Airmen.”

Post, a 32-year Air Force veteran and F-16 pilot, made the controversial statement to officers in January.

The statement was in reference to the retirement of the A-10 as recommended by the Air force, due to budget restraints. Air Force leaders have said the service cannot afford to fund single mission aircraft like it, and need to focus direct funding and resources to the development of aircraft like the F-35 Joint Strike Fighter, which Congress has not signed off on.

Post defended his actions, saying, “The objective of my comment was simply meant to focus the attention of the audience on working within the command’s constraints.”

“It was sincerely never my intention to discourage anyone’s access to their elected officials. I now understand how my poor choice of words may have led a few attendees to draw this conclusion and I offer my humble apology for causing any undue strain on the command and its mission,” he added.

ACC found that Gen. Post’s comments had a “chilling effect” on airmen, which hindered their ability to speak frankly with lawmakers.

The Air Force has not announced what Post’s next assignment will be.