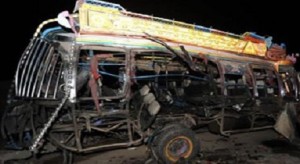 Americans would have been hard pressed not to have seen the December 16 news stories of the Taliban attack on school in the city of Peshawar in Pakistan. The terrorist attack left 145 people dead, 132 of which were children, and dozens more injured and/or traumatized.

A lesser known story is that on December 12th and 13th, two American soldiers and 19 Afghan security force soldiers were killed in Afghanistan during a series of attacks carried out by the Taliban.

The onslaught began last Friday when a bomb explosion hit a convoy of NATO-led International Security Assistance Force (ISAF) troops near Bagram. That blast killed the two American soldiers. The fallen soldiers’ identities have not yet been released.

The very next morning, the Taliban attacked twelve Afghan civilians in the southern Helmand province as they were clearing and defusing Taliban-planted mines in their neighborhood, in an attempt to target military vehicles. Afghan security forces arrived at the scene of the attack and managed to kill three of the militants and arrest four others.

On Saturday afternoon, a Taliban suicide bomber in Kabul targeted a bus carrying Afghan National Army personnel. In that attack, six Afghan army personnel were killed and 18 other people were injured, including two female bystanders. The Taliban spokesman claimed responsibility for the suicide bomb attack in an e-mail that also declared that the Taliban was increasing its attacks against foreign and Afghan forces.The Taliban also delivered a separate warning Saturday via Facebook.

The surge of violence comes just as Afghan forces are preparing to take on the brunt of responsibility for defending the country’s security, as ISAF forces transition to supporting roles. As the year draws to a close, U.S. forces will end their active combat role in Afghanistan and instead focus on training, advising and assisting Afghan troops, carrying out counter terrorism missions.

Around 11,000 American military personnel will remain in Afghanistan in the beginning of 2015. American forces numbers are scheduled to drop down to approximately 5,500 in 2016. With all of the increased Taliban activity in Afghanistan, many in the military community are comparing the situation to the current circumstances with the Islamic State in Iraq. Is it wise to continue our drawdown and ultimate withdrawal of forces while there is still a strong possibility that insurgents may overtake the local forces and unravel all that our service members have fought and sacrificed for over the last thirteen years?