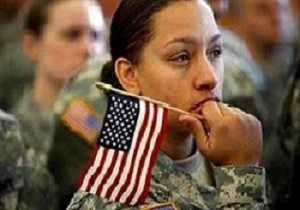 With the number of women separating from the military, and the increasing number of women joining the ranks, there is a growing concern that the U.S. Department of Veterans Affairs (VA) and other government agencies are not doing enough to aid them and their distinctive needs. A report recently released by the Disabled American Veterans (DAV) details areas where policies are lacking in their support of female Veterans.

The DAV report found multiple inadequacies in the way that the VA cares for female Veterans returning from Iraq and Afghanistan. The report blamed most of the shortcomings on a lack of regard for the separate needs of female Veterans. The study points out that these programs focus on male Veterans, who make up nearly 90% of the Veteran population, as well as current military personnel.

The VA healthcare system treated approximately 390,000 female Veterans last year at various facilities. While this number has more than doubled since September 11, 2001, it is still far lower than the estimated 5.3 million male Veterans who were treated by the VA.

Currently, one in four VA hospitals do not have a full time gynecologist on staff. Out of 920 community-based clinics that serve Veterans in rural areas 140 do not have a designated women’s health provider. According to the report, one in five female Veterans was subjected to delayed treatment or went without treatment.

With the number of women in the military increasing, the number of female Veterans is rapidly rising as well. In fact, women are the fastest growing population of Veterans by percentages, according to the VA. If the VA and the federal government do not focus on plans to care specifically for women and their needs, then they will be failing all women in uniform.

While many officials and members of the public will attempt to justify the discrepancies in treatment for female Veterans by saying that the agencies are just providing for the greater good, it is an unacceptable defense. Medical treatment cannot be a “one size fits most” mentality. Every Veteran deserves individualized care, regardless of their gender, ethnicity or ailment.