Military Blog
You are here: Home1 / Military Connection: Pressure Building to Send Troops Back to Iraq 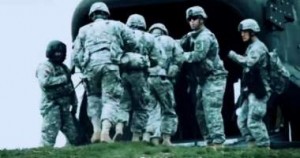 According to recent polls, Americans may be moving on from their war weariness. Public opinion has changed direction, and isn’t the same as it was a year ago when the subject of putting boots on the ground in Iraq raised ire.

In early February, 52% of Americans believed that the U.S. should send combat troops back to Iraq, a recent poll revealed. The troops sent would be part of an international coalition to fight ISIS. Previously, only 48% of those polled were favor of boots on the ground in Iraq. Furthermore, in the last four months, the number of people who were opposed to the idea declined from 36% to 28%.

These polls suggest that the rise of the Islamic State, also known as ISIS, has raised concerns of international terrorism, while diminishing opposition to quell the advance of the terrorist group by sending troops.

A poll done by NBC News/Marist Poll showed 66% of Americans believe that some ground troops are needed to combat ISIS. But only a small percentage of that 66% agree with sending a large number of forces.

The shift could be due to the fact that a lot of Americans feel that the U.S. and their allies were no longer winning the war on terror.

Public support is leaning in favor of a debate held at Capitol Hill, where lawmakers are considering a bill expanding President Obama’s authority to use military force against ISIS. Another poll shows that a 54 yes to 32 no stands in favor of Americans wanting their Congressmen to vote for the measure.

American forces spent eight-and-a-half years in Iraq, training and fighting alongside of an Iraqi army that now numbers approximately 245,000. Official estimates of ISIS fighters have grown from 9,000 to just approximately 30,000, suggesting the U.S. presence and its bombing campaign has boosted the militants’ recruitment efforts.

Military Connection: Pressure Building to Send Troops Back to Iraq: By Debbie Gregory