Military Blog
You are here: Home1 / Military Connection: ‘No Peace’ in Ferguson: By Joe Silva 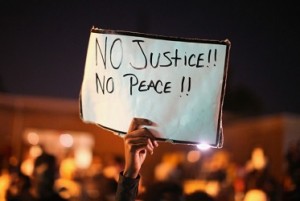 They say what’s happening in Ferguson is not about color, but it is… it’s about Army green, law enforcement’s tactical black, and also about red, white and blue.

On Monday afternoon, Ferguson, Missouri was the epicenter of unrest over a grand jury’s decision not to indict police officer Darren Wilson for the August 9, 2014 shooting death of 18-year-old Michael Brown.

Since the death of Brown, demonstrations and clashes between protesters and law enforcement have been a constant in Ferguson. On August 18th, the Missouri National Guard activated and deployed to Ferguson to help restore the peace.

The Missouri National Guard was reportedly reactivated on November 17th  by Governor Jay Nixon, to assist local law enforcement in and around the St. Louis area and its suburbs, especially Ferguson. Reports are unclear as to what degree the National Guard was involved after the November 24th announcement was made.

After the decision was made public, protests began. Some demonstrations were peaceful, and some were violent rampages that included looting and arson. Smaller-scaled protests and unrest took place around the country.

“No Justice, no peace” is the slogan that can be heard chanted and yelled by protestors on the news footage. This slogan was also heard in other instances, dating back to at least the 1970’s. But do people today truly understand what they are saying when they declare, “No justice, no peace?”

“No justice, no peace” could be taken as a threat of war. Service members and Veterans might know what war entails, but chances are, the people making this declarative threat do not. Great care needs to go into the creation and maintaining of both peace and war. The fact that this battle cry is being used in this instance shows that individuals either don’t know what it is they are saying, or have a complete disregard for their community, their nation, and the men and women who fight and have fought to protect their freedoms abroad and in their own neighborhoods.

“No Peace” in Ferguson, in the late hours of November 24th, meant that businesses were looted, burned and destroyed, police cars were overturned and set on fire, and more than 150 gunshots were heard, and not from law enforcement. “No peace” also meant that any well-intentioned protests of a young man’s death was overshadowed.

People call what is happening in Ferguson a race issue, but law enforcement officers, members of the National Guard, and business owners come in all colors, races and ideologies. And most importantly, all those involved, on both sides of this conflict, are Americans.

Our thoughts are with the community of Ferguson, the Missouri National Guard, and law enforcement.

Military Connection: ‘No Peace’ in Ferguson: By Joe Silva