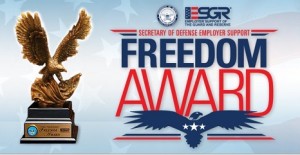 National Guard and Reserve members- does your employer go above and beyond to assist you with your service obligations? If so, then perhaps you should nominate your employer for a 2015 Freedom Award.

Members of the Guard and Reserve make up nearly half of our nation’s military force. These citizen-soldiers provide essential services to maintain national security and conduct humanitarian efforts at home and abroad. The cooperation of their employers eases the burden of sacrifice on service members, and helps keep our military prepared and our nation protected.

In 1996, then-Secretary of Defense William Perry presented the first Freedom Awards to Schneider National, McDonnell Douglas, National Life of Vermont, Tektronix, and United Parcel Service (UPS) Central Florida District. Since then, up to fifteen Freedom Awards are presented each year. A total of 205 employers have received the award.

The ESGR is asking for members of the Guard, Reserves, or family members acting on their behalf, to submit nominations for employers at www.FreedomAward.mil by Jan. 19, 2015. Nominations for employers from companies of all industries, functions and sizes will be accepted, so long as they are the service member’s current employer. Each year, a Freedom Award ceremony is held in Washington, D.C. to present the awards to deserving employers.

MilitaryConnection.com is a “Top 100” employment website, and as such, we want to be sure that the wonderful employers who go above and beyond in their efforts to support the members of the Guard and Reserves receive recognition. Military Connection is a long-time supporter of the ESGR and often facilitate signings of support for employers.