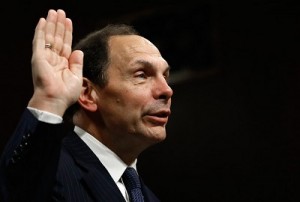 On July 29, 2014, the Senate unanimously confirmed Robert McDonald as the next Secretary of the U.S. Department of Veterans Affairs.

By a vote of 97-0, the Senate approved President Obama’s nomination to head the VA. McDonald is tasked with the duty of repairing the integrity, efficiency and reputation of the VA.

McDonald takes over for Acting-Secretary Sloan Gibson, who has been temporarily running the VA since Gen. Eric Shinseki resigned on May 30th. The VA has been inundated by criticism in regards to the long wait-times for Veterans to receive healthcare, and the substantiated reports of employees conspiring to cover up the wait-times.

Hailing from Cincinnati, 61 year old McDonald is the former CEO of Procter &amp,amp,amp,amp, Gamble. As VA Secretary, he will be expected to address the short-cummings and  outright failures of the department. McDonald vowed to transform the VA, and said that improving Veterans’ access to healthcare will be a top priority for him.

Lawmakers, Veterans and Veteran advocates have all stated their agreement that McDonald faces a colossal task as VA Secretary. Not only will Sec. McDonald be expected to create transparency and accountability within the VA system, but he also faces the scores of other uphill battles that the VA is fighting.

The VA is still working to eliminate homelessness among Veterans, and to decrease its lengthy claims backlog. McDonald may receive aid for these bouts in the form of an estimated $17 billion VA reform bill that is expected to pass in Congress this week.

But even after Congress passes a bill, be it this summer ****or**** in the fall, McDonald is inheriting a VA that is coping with an intolerably high Veteran suicide rate, as well as scores of claims from wounded Veterans, including PTSD and those coping with sexual assaults.

McDonald has reported his plan to include improving communication within the VA, which includes more than 300,000 employees in all 50 states and the District of Columbia. As part of this plan, McDonald said that he will host frequent video conferences with employees, and travel to field offices around the country.