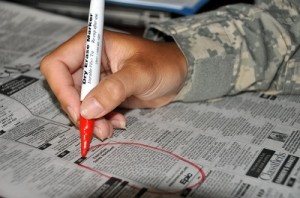 The U.S. Bureau of Labor Statistics  (BLS) released their monthly report “The Employment Situation” for August, 2014. The report details the current statistics of employment and tracks the current trends.

Many conscientious Americans, including employers and staffing organizations, utilize data found in the BLS report. Military Connection studies the reports to keep track of unemployment among military Veterans.

Iraq and Afghanistan War-era Veterans, referred to as Gulf War-era II Veterans, still remain the demographic with the highest levels of unemployment. The generation, as a whole, chalks up an unemployment rate of 8.1%. While this number is inexcusably high, it is still lower than the 10.0% from the same time last year.

Female Gulf War-era II Veterans saw the biggest improvement from the previous year’s mark when that demographic recorded a 10.3% unemployment rate.Female Iraq and Afghanistan-era Veterans currently have an unemployment rate of 7.6, a drop of 2.7%!

Male Gulf War-era II Veterans was the demographic with the single-highest unemployment percentage at 8.2% in August 2014. But even this number was down from the 9.9% rate from August 2013.

Looking at the data that the BLS report provides a snapshot of our national economy and the employment picture. While more Americans are finding jobs, our most recent generation of Veterans is still having trouble getting hired.

Employers are encouraged to utilize conduits that link their openings to Veterans. The MilitaryConnection.com job board is an excellent example of a tool that brings employers and Veterans together to lower unemployment even further.