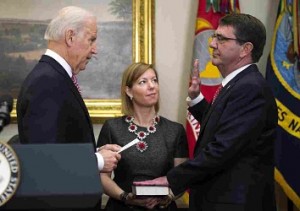 Ashton Carter was sworn in as the Secretary of Defense on February 17, 2015. Carter takes over the position as the fourth Defense Secretary of the Obama Administration, and the only one of the four who has never served in uniform. Given this fact, many Americans, especially the service members and civilians who work for the DOD, want to know where Carter stands on certain topics.

Knowing that this was an issue, Carter stated three of his priorities in a message sent out to all DOD personnel.

“Our first priority is helping the president make the best possible national security decisions for protecting our country– and then implementing those decisions with our department’s long-admired excellence,” Sec. Carter stated in the message.

The second priority that Carter laid out was ensuring the strength and health of “…the greatest fighting force the world has ever known – our soldiers, sailors, airmen, Marines, civilians, and contractors all around the world.”

Secretary Carter intends to cover this priority by focusing on the well-being, safety and dignity of service members, DOD contractors and their families. The secretary pledged to offer top-notch equipment and training, and to take the “utmost care” when making decisions that would put them in harm’s way. Carter called this his “highest responsibility as secretary of defense.”

Carter’s third priority is a focus on building the force of the future. He said that the department must steer through sequestration, which imposes an uncertainty harmful to national defense.

“We must balance all parts of our defense budget so that we continue to attract the best people – people like you; so that there are enough of you to defend our interests around the world; and so that you are always well-equipped and well-trained to execute your critical mission.”

“It also means embracing the future – and embracing change.”

While Secretary Carter has never served in uniform, his service in the Pentagon has spanned more than three decades, originally working during the Clinton Administration as an Assistant Secretary for Internal Security Policy. Carter worked in the Pentagon under eleven other secretaries of defense.