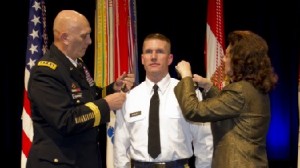 On January 30, 2015, Sergeant Major Daniel Dailey was sworn in as the Sergeant Major of the Army (SMA), becoming the service chief’s top adviser on all matters concerning enlisted soldiers.

As Sgt. Maj. Dailey takes over the SMA position, he will be a key component as to how the Army views and treats its enlisted members. Over the next few years, the branch will face budget cuts, downsizing, and probable missions against the Islamic State and other threats. Dailey’s views and stances will play a critical role, and many want to know what they are.

The Army’s current force size is at 490,000, with the Pentagon pushing for a force end-strength between 440,000 and 450,000 over the next few years. This means that the Army is going to have to become more selective when it comes to recruiting and retention. The branch is already gearing up for this attitude, as it recently changed its recruiting slogan to “Can you make cut?”

Sgt. Maj. Dailey believes that as part of his duties, he ensures that the Army involuntary separates, or otherwise forces out the least amount of good soldiers as possible. But the SMA is all for putting the “greater good” over what is good for some, and is therefore not opposed to reducing the Army’s force size.

The SMA’s outlook may not be what many current and prospective soldiers want to hear. Many prefer the war-time “come one-come all” and “stay as long you want” attitudes that the Army was pushing regarding recruiting and retention over the last decade and a half. But Sgt. Maj. Dailey’s reasoning is sound, and epitomizes the level of responsibility of his position as Sergeant Major of the Army.

Dailey believes that the U.S. Army has a responsibility to defend this nation, which includes preserving its resources and wealth, even if it means reducing the military’s budget and force size.