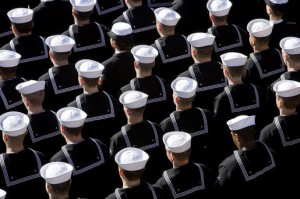 Every year, thousands of service members separate from their military branch, for a multitude of reasons. Some of these men and women want to enroll in school, start a family, or reconnect with their families after multiple deployments and years spent away from home. Whatever the reason for leaving, military officials believe that they may be letting too many quality service members go, and are devising ways to retain some of the “keepers.”

Currently, the Navy offers a program called the Career Intermission Program (CIP) that annually allows twenty officers and twenty enlisted personnel  to transfer out of the active duty component and into the Individual Ready Reserve, for up to three years, all the while retaining their active duty healthcare coverage.

But CIP is a complicated and limited program, with numerous restrictions that may disqualify many of the same personnel that the Navy is trying to retain.

Chief of Naval Personnel Vice Admiral Bill Moran is pressing for an improved program that will do more than CIP does. Vice Admiral Moran is looking for ways to keep more quality sailors and naval officers in uniform, even if it means letting them take the uniform off for a few years.

“We need to offer meaningful incentives to keep the best talent we can, both men and women,” Moran said.

Vice Admiral Moran has proposed allowing service members to take a sabbatical from service. He believes that quality officers and sailors should be allowed to leave the Navy for a few years in order to accomplish their own personal, academic and familial goals, and then be allowed to return at the same rank and on the same career path.

By giving these service members this opportunity, it is more likely that quality personnel, who might otherwise leave the service, will stay for the long-term and become the senior leaders the Navy needs.

Vice Admiral Moran intends to ask Congress for the authority to expand the CIP program by opening it up to more personnel and altering some of the restrictions, including years of service and job description requirements.

The Air Force, Army and Marine Corps are each in the process of implementing their own pilot sabbatical programs.

While the Navy’s CIP program hasn’t been widely used in its five year history, Navy leaders, including Moran, believe that service members who want to pursue and complete their own personal, academic and familial goals are exactly the type of quality people needed to run the U.S. military in the decades to come.