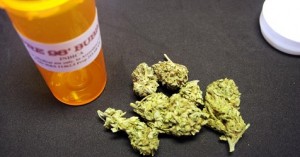 The Department of Veterans Affairs (VA) contends that approximately 20% of the 2.8 million American Veterans who served in Iraq and Afghanistan now suffer from ailments such as PTSD and depression. Through their VA medical and psychological care, nearly one million Veterans have been prescribed opioids to treat their conditions. More than half of these Veterans continue to use their prescribed medications beyond 90 days. Currently, there is legislation in the U.S. House of Representatives that could allow marijuana to be prescribed as medication for anxiety and stress disorders.

The Veterans Equal Access Act of 2014 H.R. 5762 was introduced by Rep. Earl Blumenauer (D-Ore.) and Rep. Dana Rohrabacher (R-Calif.) and is intended to challenge the VA’s current policy regarding the use of marijuana, even if recreational or medical marijuana is legal in a particular state.

Currently, the federal government classifies marijuana as a Schedule I drug, the same as LSD and heroin, and deems that the drug has no accepted medical use, and has a high potential for abuse. This stance makes it impossible for the VA, a federal department that runs the largest network of hospitals and health clinics in the country, to prescribe marijuana as a treatment. The VA, abiding in accordance with current federal law, maintains that its physicians and chronic-pain specialists “are prohibited from recommending and prescribing medical marijuana for PTSD or other pain-related issues.”

Meanwhile, researchers in the United States and several other countries have found evidence that medical marijuana can help treat post-traumatic stress disorder, pain and anxiety. Currently, 23 states permit medical marijuana use, including Oregon and California. Alaska, Colorado, Oregon, Washington and Washington D.C. have all passed legislation legalizing recreational use, thus legalizing marijuana, with restrictions that vary state to state.

The long and short of the matter is that there are a lot of Veterans suffering from service-connected ailments and disorders. No matter what an individual’s personal belief about a substance is, it should be universally agreed upon that Veterans deserve access to any and all procedures, treatments and medications that will make them well, or have the potential to improve their conditions.