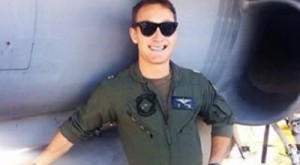 Airdales across the U.S. Navy are mourning the loss of their own after two F/A-18C jets from the U.S.S. Carl Vinson (CVN-70) collided over the Pacific Ocean, near Wake Island. The Carl Vinson Carrier Strike Group left San Diego in August for a nine and a half month deployment.

The collision happened on September 12, 2014, just seven miles from the carrier. Both aircraft and pilots were from Carrier Air Wing 17, which is based out of Naval Air Station Lemoore in California.

One of the pilots was recovered by rescue approximately 45 minutes after the crash by helicopters that were deployed from the Carl Vinson.

The guided missile destroyers USS Gridley (DDG-101), USS Sterett (DDG-104) and USS Dewey (DDG-105), and the guided missile cruiser USS Bunker Hill (CG-52) all participated in the search for the other pilot. After a 36-hour search turned up no sight of him,  the missing pilot was presumed dead.

The lost pilot has been identified as 26 year old Lt. Nathan Poloski of Lake Arrowhead, California. Poloski was a 2009 graduate of the Naval Academy. Reports say that Poloski dreamed of being a naval aviator since his mother took him to see the iconic Blue Angels when he was child. After achieving his dream of becoming a Navy Flyer, Lt. Poloski planned to fulfill his second dream of going to medical school and becoming a doctor.

The cause of the collision is under investigation.

The staff at Military Connection would like to extend our deepest sympathies to the family of Lt. Poloski, as well as to the men and women of Carrier Air Wing 17, and the Carl Vinson Carrier Strike Group.