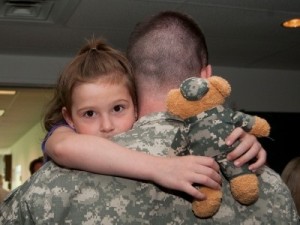 A study released in March, 2014 focused on the children of service members and Veterans wounded in the wars in Iraq and Afghanistan. The “Study on Children of Seriously Wounded Service Members” was conducted by the Caster Family Center for Nonprofit and Philanthropic Research at the University of San Diego.

The study was conducted by interviewing 125 participants over a one year period. The participants included seriously wounded service members, their spouses and children, as well as military, civilian and nonprofit experts who work with these families. The study was intended to assess the children’s needs, and determine what services were already available to meet those needs.

The study also found that invisible wounds of war, including psychological injuries like PTSD and physical injuries such as TBI, may be more significant for families of seriously wounded Veterans. Because of their unpredictable nature, these wounds in a parent can cause subsequent emotional scarring and isolation in the children of wounded parents. But by meeting other families who are facing similar issues, military families with seriously wounded Veterans can better cope.

The study recommends the formation of a consortium of groups currently working to support the families of wounded Iraq and Afghanistan Veterans. This collaborative effort would be more capable of centralizing services provided to families in need.

So far, about a dozen groups have attended an initial assembly, and plan to hold quarterly meetings in order to share information and resources.