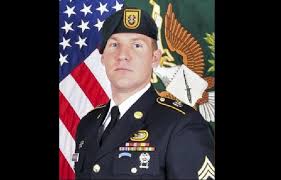 Additionally, six Afghan soldiers and another American were wounded after their vehicle was struck by a roadside bomb while they were on patrol near the provincial capital of Lashkar Gah.

This was his first deployment to Afghanistan, but had previously served in Iraq supporting Operation Inherent Resolve.

“He was an exceptional Green Beret, a cherished teammate, and devoted husband,” Lt. Col. Kevin M. Trujillo, commander of special operations task force in Afghanistan, said in a statement. “His service in Afghanistan and Iraq speak to his level of dedication, courage, and commitment to something greater than himself.”

Thompson enlisted in March 2011 as a special forces candidate and reported to 1st Special Forces Group as a medical sergeant in August 2014.

Our thoughts are with Thompson’s family and loved ones during this difficult time. We offer out gratitude for this brave soldier’s service and sacrifice.