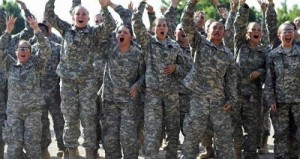 While opportunities in all branches of the armed forces are less abundant than they were just a few years ago, there is one population that appears to be in high demand for military officials. The Army could be looking for female volunteers to attend Ranger school.

Last week, Secretary for the U.S. Department of the Navy, Ray Mabus, voiced his desire to see more females in Navy and Marine Corps uniforms. Now it seems that senior Army leaders might be looking for female soldiers to participate in a one-time opportunity to attend the elite Army Ranger training.

The invitation is part of the military-wide effort to assess how to open combat-oriented occupational specialties to women. The Army is expected to decide in January if it wants to proceed with its experiment of an integrated Ranger school. If the Army does move forward, it would more than likely happen in Spring, 2015.  At that point, the Army will need female volunteers already in place and ready for Ranger school.

As part of this potential experiment, the Army is looking for two groups of volunteers, as outlined in two separate All-Army Activity messages.The Army is seeking female soldiers in ranks E-4 through O-4 who would be interested in attending Ranger school as students. All applicants must meet the same prerequisites and physical qualifications that males are held to in order to attend Ranger school.

Any female soldier who volunteers and manages to successfully complete and graduate from Ranger school will receive a graduation certificate, and be awarded and authorized to wear the Ranger tab.

However, women who graduate Ranger school may or may not be permitted to receive the associated Ranger skill identifiers, or be assigned to Ranger coded units or positions, pending future decisions about whether women will be allowed to serve in combat arms MOSs.

Female soldiers can also volunteer to serve as observers and advisers to the Airborne and Ranger Training Brigade. These slots are open to enlisted personnel E-6 through E-8 and officers in paygrades of CWO 2-3 and O-2 through O-4. Volunteers for this assignment will not be Ranger instructors, and they will not evaluate students in the course.

Selection packets for both groups are due by October 10, 2014. Interested soldiers should work with their personnel officers and chain of command to submit their applications.

Applicants should be able to find out the results of their applications in December.

The Army has not yet determined how many volunteers it needs, part of the open-call is also is to determine the level of interest among female soldiers.