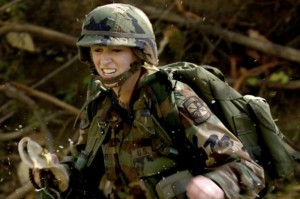 The remaining eight female soldiers washed out of the Army’s prestigious Ranger School after 11 others didn’t make it past the first cut. Sadly, none of these brave women will earn the vaunted black and gold Ranger tab. As for the men, 115 of the original male contenders met the requirement to begin the Mountain Phase of Ranger School in Dahlonega, GA.

Approximately 35 male Ranger students failed to meet the standards of Ranger School and will not be recycled, the press release said.

“They will return to their units having learned a great deal about themselves and small unit tactics, patrolling, leadership, and team work,” according to the release.

While some headlines are declaring this a failure, which suggests it’s a sign that women can’t handle the demanding tests, women made it past some of the physical hurdles at nearly the same rates as men. And the fact that no women candidates moved forward this time doesn’t spell the end of women tackling the Army’s toughest leadership course, which spans two months, three phases and endless physical obstacles, including sleep and food deprivation

The Darby Phase will not repeat RAP week, according to officials.

The important take-away from this exercise is that the Army has stood by what Ranger School graduates and women soldiers alike have demanded: maintaining the incredibly high standard of what senior military leaders call the “Army’s most physically and mentally-demanding course” while making room for women who could handle the test and sought the chance to meet that bar. No one wanted any slack cut, and none was.