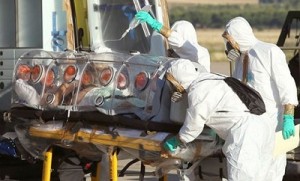 News stories are creating an Ebola scare in communities around the country. Cases of individuals suspected of having Ebola or having travelled to Western African countries without having any symptoms have forced schools to close and people to be quarantined, with more restrictions coming.

It is true that nine people have been confirmed to have had Ebola while on American soil. In fact one, Thomas Eric Duncan, even died from the virus. But the majority of Ebola reports are media hype. With that said,  it never hurts to be prepared in case the virus spreads to your neighborhood.

Although California has not yet confirmed any cases of the Ebola virus, the University of California Office of the President informed the California Department of Public Health (CDPH) that all UC Medical Centers are prepared to provide care for any Ebola cases in the state, if the need should arise.

There are five UC Medical Centers that include facilities at Davis, Irvine, Los Angeles, San Diego and San Francisco. These university hospitals will work closely with CDHP if any Ebola patients should present themselves. The announcement does not mean that the five UC Medical Centers are identified as treatment centers for Ebola cases coming from outside of the U.S. by the State Department.

CDHP will ensure that the UC Medical Centers have the most current treatment information for Ebola cases. The department and the individual facilities will make sure that the staff at all five medical facilities have the proper personal protective equipment to prevent the spreading of the virus from patients to healthcare professionals.

The Centers for Disease Control recently updated the PPE guidance, aligning them with California’s stricter standards. State officials will also work with these medical centers to ensure that medical waste generated from the treatment of an Ebola patient will be properly handled and disposed of.

In California, all hospitals in the state are expected to screen, identify and quarantine any patients at risk for Ebola. After initial screening, if further testing of the patient is needed, the hospital will contact the local health department, which can facilitate a more detailed assessment. If necessary, the local health officer will then coordinate with CDPH and CDC to pursue testing at CDC-approved laboratories. During the process, the patient would remain in isolation until the test results are received. If the result is positive, CDPH will work with the hospital, local health officers and the CDC to transfer the patient as needed.

Everyone should know that measures are being put in place in their communities around the country to detect, contain and ultimately cure the Ebola virus. Despite what news reports might tell you, there is no need to panic.